On September 12th, 2001, one day after the World Trade Center Attacks in lower Manhattan, a Gateway truck pulled up to my studio in Union Square and delivered my new flat screen computer. Allbridges and tunnels in and out of the city were closed. This delivery truck arrived because it had never made it out the city the day before. 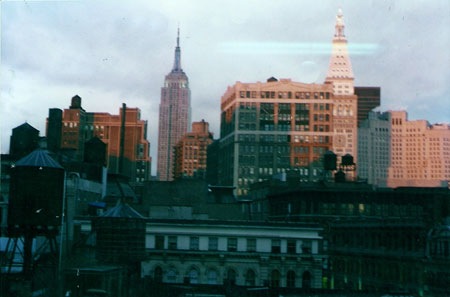 and was at my desk in my studio at 41 Union Square.

F-16s flew over that day and in the ensuing weeks and months it became increasingly clear that any freelance work that I would have normally been asked to do had dried up. Al Qaeda bombed lower Manhattan essentially crippling the financial district and any publishing efforts in New York. Everything froze in place.

I did not have one single freelance editorial assignment that year. I had signed the lease for the studio Room 814 on August 1st, 2001, just one month before the attacks.

A long year with no work stretched ahead of me.

So here’s what I did: I took any and all of the notes from my numerous on site assignments in America and scanned them into this new computer. I transformed these handwritten journal entries into individual back-stories from what I saw and found while working on location for the likes of The New Yorker, Yankee, and SportsIllustrated. I found all of the original images, there are approximately 28 images for each ‘chapter’ and put them into position next to the text.

I spent 2001 writing in rough form the portfolio I am posting to this blog today. Not all of the images are present but it gives a rough idea of how I work what I saw and how I felt. Four of the locations I chronicled no longer exist.

Take a look. Please read the pieces of prose in the forward. This explains clearly how I felt being a witness to history, The Visual American on the road.