I love toys. I guess you could say that I am a big kid at heart. When I heard that Herb Barker and his wife Gloria, Mr. and Mrs. B as they are affectionately called, had spent twenty years collecting Popeye dolls and Pez dispensers (and who knows what else), I knew I had to go see their cartoon museum for myself.

Piped in music from painted wooden Tweety Bird characters greet me as I pull into their driveway. I didn’t know what I’d see; a few Howdy Doody dolls, one or two Donald Duck toys or maybe a few Disney items.

This place, a renovated farmhouse on several acres is beyond a personal collection of popular culture. It borders on obsession. The Barkers don’t just have one Gumby figure they own the entire Gumby collection. They own the original Gumby and Pokey sets from the TV show and anything and everything related to the plastic green guy. And all of Tweety Bird. He bought out the entire Tweety Bird estate from a private collector.

“He can only show a little bit of what he owns here,” Claudia DiDato the museum’s curator explains.”

“Even though we officially opened in September, we’ve already run out of room for Mr. B’s collection. Actually this building that you are standing in used to be the run down horse barn for the farmhouse.”

Claudia is the first person I meet after announcing to the staff in the main building that I’d like to see the ‘lunch box collection’. She is vivacious and full of energy. And information.

“Mr. B found me just like he finds everybody who works for him. My son started to fix the Barkers’ G.I. Joe collection after school. Soon my house became overrun with G.I. Joe dolls, it was like he had a separate, personal annex just for these toys, in my garage! Mr.B and I started talking and he said you should come run my toy museum. So sure enough the first day I break one of his porcelain figures. And then by accident he breaks a doll.

And he says to me in all my years of collecting I have never broken a toy. So in my head I’m planning how to quit after the first day and at the end of the day he said, ‘don’t you understand, once you come work for me you have a job for life?’ And that was that and I have been here ever since.”

“Did you know that G.I. Joe was the first doll to be called an action figure? They called it that so boys wouldn’t think they were playing with dolls. Look on the hand of that G.I. Joe doll there. See, the nail of the thumb is placed on the bottom of the figure so manufacturers could check to see if someone was copying their design. Also female action figures are much rarer to find intact because they are the ones the boys would always bite the heads off of first!”

Claudia catches her breath. “When I started here I told Mr. B that I didn’t know anything about toys. All that I know is from hanging around my son and I got the hang of it. All of this information stays with you. You’ll see. When you leave here today you’ll be thinking about toys in a completely different way.”

The museum is out back. Claudia uses a key to let me in. It’s like finding out for the first time there is a secret room behind my grandparents’ bookshelf in the attic. A hidden special place. Filled with toys.

Inside the museum I see ‘stuff’ everywhere, neatly displayed in clean, well lit glass cases, in boxes on shelves, hanging above me in row, after row of pegs in the ceiling. Every inch of space has a collectible. Each piece has been carefully selected. 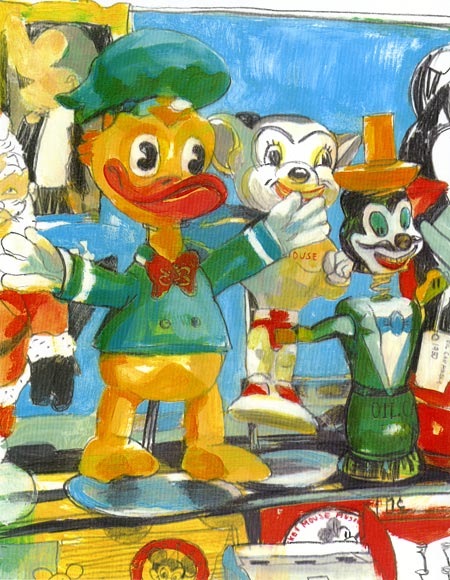 I notice there is a special place for each piece. They are arranged by era, or by item; all of the PeeWee Herman items and Star Wars collectibles in their spots, all the Disney and Raggedy Ann dolls sit together. “Mr. B had to take over his father’s business at a very young age so he never really had time to play with toys. That’s how all of this got started.”

We move past a glass case of wooden toys and character telephones. “Now, Gloria, Mrs. B loves tin banks. She spent $120 dollars for this one alone. Do you believe it? Tin. You never see tin or wood toys anymore. See, these lunch boxes?” They are hanging neatly in plastic and metal rows above my head.  “Well, Ralph Nader came out and said that kids were injuring each other so metal lunch boxes had to be phased out.” I used to have one of those red plaid ones with a thermos inside I think to myself.

I see Buzz Lightyear and the Darth Vader figures still in their carton. “If the toy is in the original box it is much more valuable because the box is the first thing the kid throws out. They make toys now with the collector in mind. You can reach in and play with the toy while it’s still in the box. And pull toys, dolls with the string coming out of the back? Dolls that talk are rare because once the pull mechanism is broken it cannot be fixed. Look at this Gabe Kaplan, Welcome Back Kotter pull toy. When you pull its string it sings a song in Spanish. I finally asked a visitor from Cuba to translate the song for me and what do you know, it’s all curses in singsong!”

“Anything paper, comic books, masks, posters, board games they are all valuable. If you find a board game where the corners aren’t broken or frayed they are really valuable. But even more valuable are the written instructions or the rules for the game. If we found a game, say your grandmother played in her day, we wouldn’t know how to use it. Without the instructions it couldn’t be played.”

I notice Olive Oyl and a wolf head in a case filled with hand puppets. I had the exact same puppets as a kid. I know by heart the distinct patterned cloth and exactly how they fit and feel on my hand. It surprises me that the toys I played with over and over as a child are considered collector’s items. I wonder to myself if my mom still has them at home.

Next to the puppets in a row on the shelf are Dick Tracy and Casper plastic bubble bath dispensers. “One guy who came in said these ‘soakies’ used to drive him crazy because only the front of Dick Tracy’s hair was black the color was not continued on the back of the head. So as a kid this guy told me he’d get a magic marker and fill in the rest of the hair.”

I also love seeing the larger Charlie McCarthy dolls. The Barkers have them in mint condition and they are almost alive, dopily grinning out at visitors waiting to speak.

“Here’s a Mickey Mouse camera Mrs. B fought Mr. B over buying. It turns out there are only six left in the country in the box.” Then we look at Superman and Batman and my favorite, Mighty Mouse on the next shelf. “Do you know how you can tell the older dolls from the newer ones?” Claudia quizzes me. “You can always tell the older super-heros because the underwear is worn on the outside.” I laugh.

“Does he know what he has?” “He knows exactly where each piece is in the museum and what he has. He loves them all individually. The Barkers find their best stuff in Florida. They’ll call me from an auction and ask, ‘do we already have such and such in such and such a case?”

This is beyond a few items. The Barkers have left nothing, no remnant of TV, print, radio or cartoon culture uncollected. 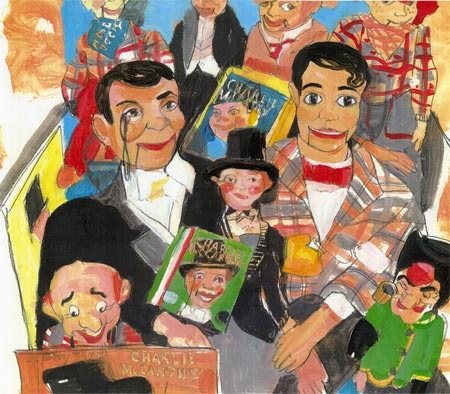 “Do you think this is an obsession?” I ask. Claudia laughs and throws up her hands. “I guess you could say it’s more like a love affair.”