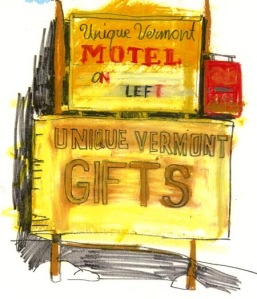 Rte. 9 is officially known as the Molly Stark Trail.

Whoever said Vermonters were closed mouthed? These people talk to me way more than I expected.

Who is Molly Stark? Everybody has a theory. “Molly is more legend than fact,” the lady at the Bennington Bookstore offers. “She was indicative of the women of her time. Any portrait of a woman in a lacy collar will do.”

“She was the great woman behind the man,” her assistant pipes up from behind the counter. He winks at me. “I’m a native and I know as much about her as you do.”

They can’t give me any more info. And I am reluctant to probe further. Behind them on the wall is a sign that reads, ’Complaint Department, Push for Assistance.’ It’s a mousetrap attached to a cardboard sign.

“Boys, yonder are the redcoats and they are ours or this night Molly Stark sleeps a widow.” John Stark to his New Hampshire Volunteers at the Battle of Bennington

“Roy, Roy, isn’t John Stark that guy who wore his wife’s clothing and rode the horse into New Hampshire? What’s the story again? It’s been so long I don’t remember.”

The blue and green flag was the flag of the Green Mountain Men, a militia who fought in the battle of Bennington and upheld land grants. 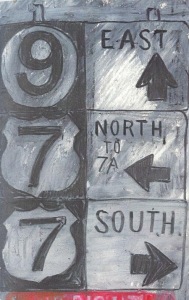 Driving in from New York State is the official start of Route 9. Old First Church is the graveyard where the poet Robert Frost is buried. It is about a two hours east to drive to Brattleboro.

Tyler Resch from the Bennington Museum tells me: Molly already had 10 children when her husband John Stark was called to battle. John was a much older man, but the men respected him. There was a militia in place that helped solve land grant disputes. In the Bennington Library I am surrounded by leather bound books, which contain the history of our really young country. Tyler pulls out a folder with over 50 years of correspondence from direct descendants of John and Molly Stark.

“The Bennington Monument is one of the few places in the country where we can actually look down on New York.” 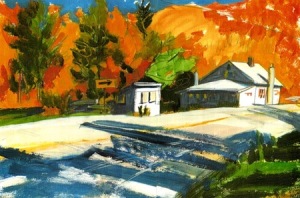 October 1st through October 15th is the peak foliage season in Southern Vermont. Even if you are a native New Englander and you’ve seen the leaves change there is nothing as remarkable as the splendor and pageantry and color of the Green Mountains in full fall ‘bloom’. Year after year it continues to be spectacular. 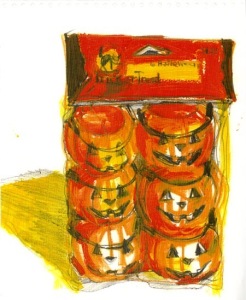 Autumn. Winter is in the wind. Orange pumpkins and yard sales. Blazing sun that casts harsh shadows and leaves abruptly at 5 p.m. You find yourself in this blaze of color and light and before you know it boom it is dark and colder. It comes up quickly and you are caught and surprised.

Tour buses pour in. ‘I’ve already had 17 today,’ Al from the 1836 General Store tells not looking up from cutting expensive Cabot cheese. 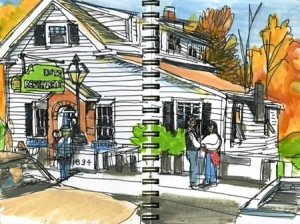 There is a line outside of Dot’s restaurant.

A dog, yellow lab at the gas station, chomps happily on his prize, a brand new stick. Clean, crisp air. “In two weeks all of this will be over,” the gas station attendant waves his arm at the yellow leaves on the maple trees. He seems relieved. 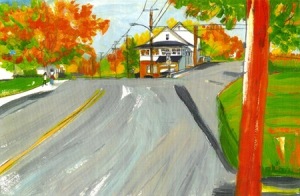 If I had to pick a place in all of the United States that says,’ October’, I’d pick Route 9 in Southern Vermont. As you come out of Bennington, you are surrounded by color, big grand color. Huge reds and oranges tinging the trees. It’s fake I think; fake, the color is so vibrant it seems fake. Orange pumpkins, men raking bushels of yellow off of their lawns, scarecrows that local kids have made line the road. Cows, looking on stupidly, mooing right at you as if they have never seen a human being before. It’s a picture postcard.

Route 9 winds down from Bennington to a base in the town of Wilmington. There is fog here in the early morning, which lifts after leaving a morning dew of mist covering everything. At night the fog creeps in over the ball fields and farms like a thick white cotton mesh. I wonder what it would be like to grow up here, to go to high school here, to live your life at the base of the mountain, to always have a mountain in view. 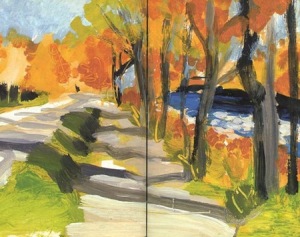 I forget to eat dinner. At 9 p.m. I venture out to look for an open 24 hour diner, a restaurant, anything. The Laundromat glows yellow in the dark. Nothing is open in Wilmington, not one place to eat. I laugh to myself and think well, geez the supermarket has to be open. I smile at my ingenuity. I can at least get some bread, a soda, some yogurt, something. The supermarket is closed too. 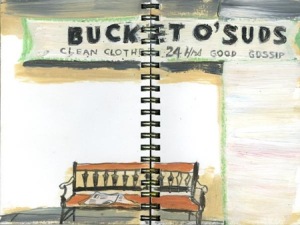 Inside the Bucket O’ Suds I see a young guy folding his clothes in the green glaze of the dryers. At least there is somebody doing something somewhere at this hour. At least this place is open.

‘Open 24 hrs, Good Gossip’ the hand painted wood sign out front promises. I double back in my car to do a load. If I can’t get a hot meal in this town after 9 o’clock at least I’ll have clean clothes.

Arlene from the Molly Stark State Park encourages me on the phone to come over and try the Mt.Olga trail. In person she is reassuring. “I’ve got a few years on you and I had no trouble walking it.”

So I start up the steep trail. It is very, very rutty and much steeper than Arlene described. I sweat and walk straight up. It is dark and damp, the leaves block out the sun. The trees are marked with a blue patch of paint and seeing each mark urges me upward. 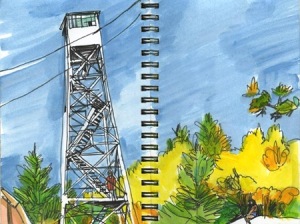 It is rough going. Right near the top of Mt. Olga there is a wooden sign that says, ‘lookout tower .01 miles.’

At the top there are big grey granite rocks, a little white hut, and beautiful trees. Plus the incredible view. A couple and their son gingerly make their way down the steps of the lookout tower. Behind them are two young guys smiling and visibly sweating and not ashamed to be out of breath.”Yeah, it was steep getting up there but totally worth it.” They throw a stick to their great happy dog and ask me the way back down the mountain. Then they guide me to a clear-cut path with truck ruts that they used, ‘it’s really muddy,’ and off I go down the mountain.

The walk down is a wide easy path, sunny and spectacular after almost dying on the way up. The leaves are so yellow so much more yellow than I could even paint. And the sky seems even bluer than it is. 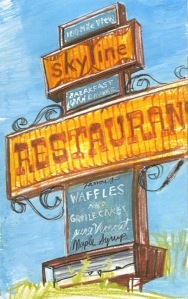 I get lost coming off the mountain. Somehow walking out I wind up at the Skyline Restaurant and not back at the Park Rangers station. Supposedly I found the free way up to the lookout tower that isn’t described in the tourists’ handbooks. The only problem; my car is still parked back in the park about five miles away. The cashier at the historical society says there are really only two ways back: go back to the top of the mountain and then back down the way I came or walk the 5 miles back on Route 9.

Luckily those two young guys, Greg and David, and their happy dog Jasmine, see me along the road and pick me up in their red Toyota pickup. So now not only have I driven Rte. 9 I have had the unique distinction of walking a good length of it as well.

If you are climbing Mt. Olga take the easy route.

There are only ten people at the Mt. Park Cinema on Sunday Night. The red seats creak. On the back of my neck I can feel the cold air from outside. Even in here watching L.A. Confidential nature pervades, she’s larger than you, way bigger. I think about my paintings; even with the colors I’ve brought I could never paint it as brilliant as what I’ve been seeing here on site.

At 10 of 7 I am the first person to arrive at the movie theater. “Where is everybody?” I ask the high school girl selling popcorn and soda. “The locals know not to come on the weekend. Wednesday night is the night they’ll come as it is only 4 dollars.”

I have breakfast at the Cup n’ Saucer in West Dover. The 100-mile view is all fogged in. I’ll drive by later for the view when the sun has burned it off.

Crying kids, handwritten menus, “God sells us all good things at the price of labor,” is scribbled on the blackboard. Sonny the bearded chef, sees me knows I am here for something more than pancakes. I feel comfortable at the S shaped turquoise green Formica counter. The raspberry pancakes are light and creamy and the Vermont Maple syrup is sugary pure and good. The waitress sees a child crying and pulls a plastic box of lollipops from beneath the counter. “Okay, pick one for your sister, too.” 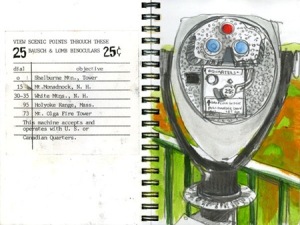 The stuffed animals can be found at the Southern Vt. Natural History Museum across from the Skyline Restaurant. The Luman Nelson Collection. He supposedly liked birds the best. I liked the bad teeth on the one beaver. And the bison and a moose head mounted on the main wall.

Housewives saved the Brattleboro Art Museum, Lillian confidently tells me at the door. ”They were going to destroy this historic railroad station and make it into a parking lot. Here’s the ticket window and the original waiting room of the Main station. You can still call Amtrak and tell them you’ll be waiting on the platform and they will stop here and pick you up. The ticket office is now our library.” 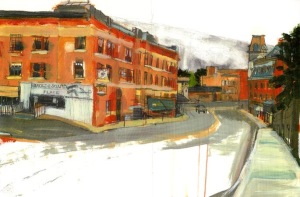 Route 9 ends in Brattleboro. It is exactly the route John Stark took to find his way home to Molly.

Brattleboro is that cold, stone, brick New England type of town I expected to find when I started driving the road last Saturday. There is a Dunkin Donuts awaiting me at the bottom of the hill and a gas station and a thrift store. And of course the Latchis Hotel. It is one of two Art Deco buildings located in Vermont. It is the end of the line for me and I am happy to be checking in.

Is there some reason why there are no remote controls on any of the TVs here in Vermont?

The best ice cream sandwich I’ve ever had. And only 50 cents. 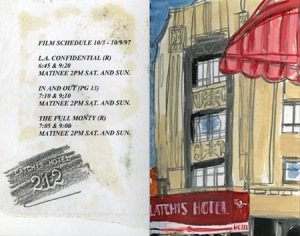 Here’s my travel tip for you if you’re visiting Route 9 and Southern Vermont in early October. You’ll need one sweater, not four, and you’ll need to book your room early. Every place I called, the Radisson, Best Western, every room in a 35-mile radius of Bennington was booked. Even North Adams and Williamston, Massachusetts were all booked. Joy from the Vintage Motel in Wilmington, whispered,’ please book your room now because if you call back this afternoon there won’t be anything left.’

She was right. Every single place I call, busy, busy, busy, busy, busy, signals. Don’t try to call for a room the Tuesday before the peak foliage weekend in Vermont. These people don’t need your business. They’ve been booked forever. They just leave the phone off the hook. 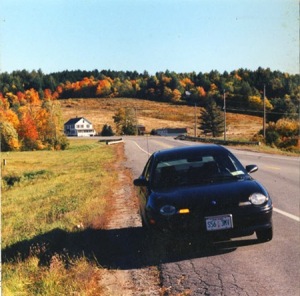 Lynn Pauley loves to drive. This is her second assignment for YANKEE Magazine. Pauley’s on site work has appeared notably in the New York Times, The New Yorker Magazine, who she painted the Oklahoma City Bombing for in 1995, and Sports Illustrated.When not on location Pauley and her black 4-door Neon are parked and locked in New York City.

Postscript: this is the last known photo taken of this car. It was stolen of the street in Brooklyn just after this trip was recorded.